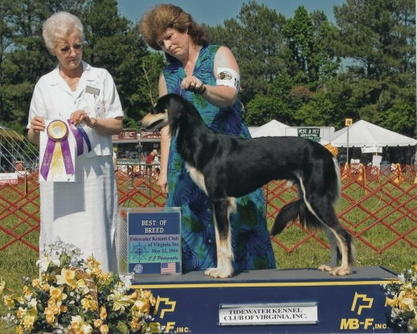 I fell in love with saluki's while working for a vet when I was in my teens. A pare of dark grizzles flew into BWI and had to stay with us over night until their flight the next day. It was love at first sight. And there began my search to have one for my very own.

My very first saluki was a rescue named Koji. She had  been hit by a car and her owners couldn't keep her. As I worked for a vet and had a large fenced yard she came to live with me. Though it was a short but endearing time. She had not been diagnosed properly and died of internal injuries from the car accident. But I was hooked and the search was on to find another saluki to share my life with. I attended a saluki match down near Washington DC and found a breeder who put me on her waiting list.
I was always looking in the paper and Dog World magazine for any information on salukis when I saw this add with a white saluki in it that said puppies available. I will forever be grateful to Helen Borden for her introduction to the breed and her many hours of phone conversations and letters. I was engaged to George at the time, my husband of 30 years and he made arrangements for Trish (Saukenuk Maru Damayanti) to be my Valentines day present in February of 1977.  We were married that May.

In 1982 when Trish's first litter of 8 was born Helen flew out to see the litter and make her pick. As I co-owned Trish with her she had first pick. I held my breath as she spent time looking and though she asked me which one was my favorite. I was determined to let her choose the one she wanted. She left that night talking about the the little black tri female. As she hadn't had any blacks at all. Though I tried not to show it, I know she saw the look in my eyes. As that was my favorite as well. When she returned the next day to pick up her puppies and go back home. She took two parti girls one black and white & one red and white. Back then as it can be now parti's were harder to finish in the show ring. She left me the little black tri (my heart dog) who I called Sal (El-Shaddai Saukenuk Sal F.Ch.) and although she didn't finish her breed title she was my introduction into lure coursing along with her two litter mates Jack (Ch. El-Shaddai's Saukenuk Jack F.Ch.) and Mac (Ch. El-Shaddai's Saukenuk Mac F.Ch.). Who both finished their championships.
I believe it was that introduction into owning/showing/breeding salukis that has been my foundation.

My first and foremost thought in breeding and showing salukis is that First they have to have good companions and still be able to do what they have been bred to do for hundreds of years.  I chose the name El-Shaddai for my kennel name as it means  God Almighty. I can bring two salukis together but it is HE who forms them into the beautiful creations that they become. I am truly thankful for the ones that have shared my life. And the places this journey with salukis has taken me, for the bond it has brought to my family especially my daughters Jessica and Melissa and my grandchildren who have already shown a love for dogs.  And the people that have come into my life because of sharing a love for a breed that has so many unique qualities and abilities.
Updated 1/2008
Due to unrelated on-going life issues, Anna is not breeding Salukis for the foreseeable future.
About Jes