We were not looking to keep one at my house, but when he came out Carmen, Anna and I all said “He’s not going anywhere.”  He (even at birth) reminded us of his Great Grand Father Ruger.  He has matured into a handsome young man and has been admired by many breeders. 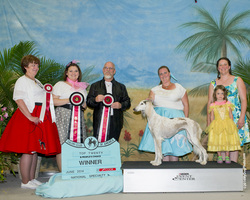 This lovely lady finished her Championship at a very young age.  She has been awarded Awards of Merits at two National Specialties (2013 & 2014), ended 2013 ranked in the top 20 Salukis, 2014 National Specialty she was awarded the Top Twenty Peoples' Choice & Judges' Choice Awards.  She is working on Agility Titles.  Sophie has always been piloted expertly by her owner Michelle Ridenour. 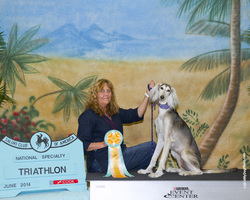 What a beauty!!  At her very first show she has proven she’s just as wonderful as her brother & sisters by going Winners Bitch for a 3pt major!! 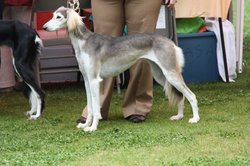 El-Shaddai PS I Miss You 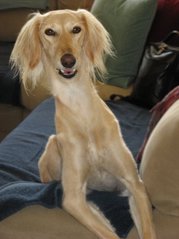