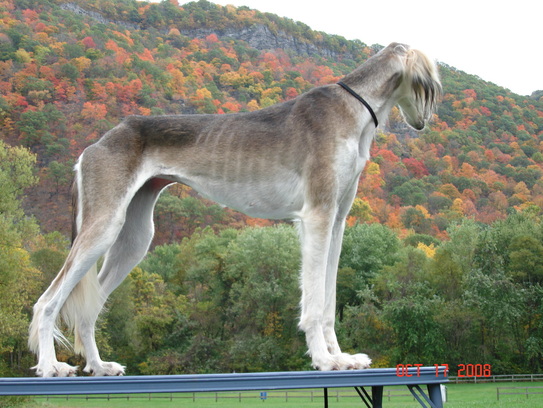 Shiloh Rose
Ch. Aijaon Aztec Dancer Chezday X BISS Ch. El-Shaddai 'el Shiyr Zamar
Printable Pedigree
Bred by: Anna Meszaros, Kim Allison, Carmen Day & Jessica Dixon
Whelped: December 19, 2007
The anxiously awaited arrival of our Zamar x Danny litter came a little earlier than expected.  During an emergency C-Section two puppies were pulled from Zamar.  The 1st one a male was deceased, the 2nd a little grizzle bitch who was not breathing.  The Vet and his techs did not give up on her, rubbing her and bringing her back from the brink of death.
When I first held her I heard “Shiloh” which when I looked it up meant “His gift”.  Through the weeks of tube  feeding and constant supervision (the majority of which Kim did) it was scary and we weren’t certain that she would make it, but I kept standing on the promise I felt God had spoken to me that December night - she was His Gift and I had peace that she would make it.
Indeed she has blossomed into a darling girl.  Full of energy and she does all things with purpose.  Shiloh Rose finished her AKC Confirmation Championship very quickly and has since gone into early “retirement”.