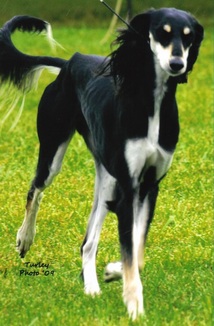 He picked me at 3 weeks of age.  He wasn’t the “pick of the litter” but he was my pick.  Some thought I was crazy when I decided that Mr. Blue was coming home with me.  I couldn’t say no to him ~ and that was the beginning of our journey together.
Zazu was my pick and as I watched him develop in my back yard I knew I had made the right decision.  His first trip to the SCOA National Speciality he was awarded 2nd in the 9-12 month Sweeps class.  His daddy Mambo was 1st in the Stud Dog class & his mommy Abby was 2nd in the Brood Bitch class.  His second trip he won the highly competitive Bred By Exhibitor class & was awarded Reserve Winners Dog!
2009 has been a GREAT year for Zazu - in February he was awarded Best of Winners at the Empire Winter Specialty, in April he was Best of Winners at the ASA Mid Atlantic TSE, June took us to the National, August Zazu finished by going Best of Breed over specials and then in September he was Best of Opposite Sex at the Garden State Saluki Club’s Summer Specialty!
There is no doubt in my mind now that he has developed into the “pick of the litter”.  I look forward to success as we venture into the Specials ring  where I hope he’ll continue to impress! 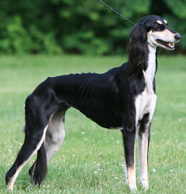 When Mambo and Abby's babies were born, I saw the pups via webcam when they were 6 hours old.  Anna held up a little black blob and said, "this is the first one born."  I looked at that black blob and said, "she looks just like her Gramma Daisy, I'll take her!"  I never looked back.  It took me 17 seconds to find her amongst her look alike litter mates when I came to PA to pick my pup.  She is everything I hoped she would be.  She is her Gramma Daisy as I wish her Gramma Daisy had been, ladylike and feminine.  Yet, she has all of the great qualities that Daisy had, lovely movement and athleticism, a witty and quirky personality and a joy for life. 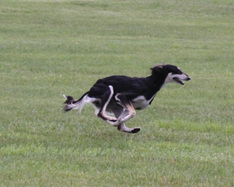 The first one in the litter to be pointed, Loki had all his points prior to 15 months of age, but he still needed his 2nd major.
Michelle and Loki are still out there looking for that 2nd major and we are sure he’ll get it soon!  Update:  Loki got his 2nd Major in style by going Winners Dog/Best of Winners at Grand Rapids Kennel Club on 5/29/2010!! 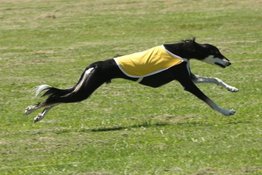 He was Laurie’s long awaited Saluki, and has not disappointed her.  Tres has excelled on the Lure Coursing Field.  He’s become the first one from his litter to complete his AKC Field Championship and has multiple BIF’s.
This Very Handsome man had definitely been a good introduction for Laurie Lee to Salukis. 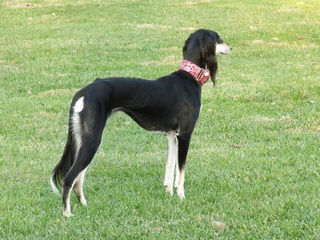 Owned by: Shelia Kelly
"The Day Faith Came Into The Nastasi Household"
I don't think it was an accident that Faith came to stay at the Nastasi household around the  Easter holiday Season .  We celebrate this sacred holiday because it represents Jesus Christ, our Savior, who rose from the dead to give hope to all that mourned him. Assuring them of God's endless peace and love that would eternally be theirs.  What better reminder of the pure, unconditional love God has for us all, than to send it to us in the form of a beautiful little creature with soft eyes and a gentle loving heart.  You see Faith came to us at a time when we were all hurting after the loss of our beloved prior Saluki, Anuba.  Each of us dealt with our grief in different ways, as we learned to go on with our daily routines, trying not to feel the vacancy that she left behind.   The joy of our lives was gone and we were pretty much resided to the fact that we would not find it again, or for a very long time.
Does God speak to us sometimes through unconventional methods?  Or are we all just struggling through life looking for signs that don't exist, creating stories in our minds so we feel comforted?  A number of people would argue for either side of those questions.   I have to wonder sometimes, though, why these "happy coincidences" (if that is a more acceptable description people can live with) always seem to happen at time when the heart is in pain and needs it most.
I find it odd that in times of selfish prayers for "worldly goods"  or "material gain" the lord seems to turn a deaf ear.   Yet when the loss of pure love and longing seems to be the core issue of the pain we ask God to heal, he has always come through.  Maybe there's a lesson to be learned and maybe only when we understand the importance of that pure love, does he answer.
I find it interesting that Anna chose the name "Faith" for this little girl.  To be honest it was not a name I would have chosen, had I picked her out from the litter myself.  I've often been teased for being a fan of the more "exotic" names that take people 2-3 times to pronounce and twice as long to remember.
Often both Anna and Kim would  speak of "Faith" and her escapades to me in our conversations.   It made me smile as it invoked happy memories of my own, sweet Anuba.    Faith, you see, was the "attention hog" of Anna's household and no other dog was allowed to have any affection if she was in the room.  I know the kind well.   I had often thought about acquiring Faith, and both Anna and Kim had suggested such a pairing, but the time didn't seem right and there were still grief issues I had to get over from losing Anuba.
One night we all decided to go out to dinner.   I thought it would be nice to get out of the house, relax, and for the first time since Anuba passed, NOT think about Salukis!  We went to one of those restaurants that have various paraphernalia hanging on the walls and ceilings, I'm sure you're familiar with.   As we were following our hostess to our table, I couldn't help but notice the chair she seated me in, had a perfect view of _said paraphernalia_ in the form of  a large sign hanging right in front of me.  That sign contained one, simple word.  A word one would not expect to find in a pop culture restaurant....._"FAITH"_   Once again the eternal question popped into my head.   Is God trying to tell me something, or am I just the most "coincidental person" in the universe?  Should I "have faith", or is "Faith" the one that I should have?"    Maybe both.  I never seem to know the answers to these questions but  they always, somehow, appear to be provided for me, later.
I say that, because I never would have known then, what was to have transpired on this most celebrated religious holiday.   The day that Faith had come home and into our lives and renewed our own faith that love, true love inspired from God is never gone forever.  Death is part of life, but there is life after death. The sun will shine again and there are many smiles and heartfelt moments to still be had.  God will prove this to us over and over again if we just open our hearts, our eyes, and listen.  "FAITH", what a wonderful, beautiful name!   I don't think I could ever of come up with a better title for this sweet, wonderful animal that describes both, what she means to us and what she has given us.   How could Anna ever have known the name she had given to this little puppy would one day prove so prophetic?  She, being a good Christian woman, perhaps she heard God's words when I could not yet hear them for myself.
"El-Shaddai's Watermark Journey" has found her home and her "journey" has come to an end.  How wonderful her new life with us had "coincidently" started the same time we celebrate Christ's resurrection symbolizing "new life" and "ascension".   Many would see this unfolding of events I've told here as mere coincidence.   I only know what I feel in my heart and that the joy and love we all feel for this little girl, speaks volumes of what could possibly be.   Then again, it may come easier for us, because we have found our "FAITH".
This is a true story I was inspired to write regarding the events leading up to the day Faith came to live with us from El-Shaddai Salukis.
Thank you Anna & God Bless!
-Sheila & family-